What are “local” agricultural plant varieties?

Today, global agricultural production is based on just a few agricultural plant varieties, created during the so called “green” revolution of the 20th century. This is the reason that “local” races of those plants, which were better adapted to specific area characteristics, have been abandoned. We are now obliged to record and protect these local varieties in order to achieve small scale quality agricultural products.

From the era that humans first discovered agriculture until today, a multitude of different plant varieties have come about, upon which our nutrition has been based. Through plant breeding techniques, especially by selecting reproductive material, we have managed to create a large number of new varieties, depending on the area in which they would be cultivated, or the nutritional needs of people living in this particular area. During the 20th century, the so called “super” varieties were created, having very wide geographical and commercial exploitation, and are used by farmers to a far greater extent versus older local varieties. The “green” revolution promised to improve world nutrition and solve the problem of hunger through the increased production of agricultural products. Through the networks of world markets, seed producing companies have managed to limit the number of agricultural plant varieties used in various countries. The “super” plant varieties offer bigger production volume compared to most local ones, hence they have almost completely dominated. Farmers worldwide have neglected their natural, local varieties, and cultivated the most commercial ones. As a result, the global agricultural economy – and consequently our nutrition – is based on a small number of crop and plant varieties.

Finally, the “green” revolution didn’t manage to solve the world hunger problem, perhaps because the deeper causes are not technical, but social and political. It did however increase global production volumes. Unfortunately, the cost of this production increased dramatically too. Super-varieties cannot adapt well everywhere. In most areas, they require irrigation and chemical support by pesticides and fertilisers. Super-productive varieties are connected to an intensive production model, based on large cultivations, and on mechanical – industrial equipment use. As production cost grows, income from agriculture is gradually vanishing, and the farmer is captive to the producers of the agriculture industry in order to continue using the same variety for production.

There is another dimension of this problem within the global agricultural production. As production is based on a few plants, it has a narrow genetic base. That is, all plants are the same as each other. And this similarity extends completely for whole continents. For example the IR-36 rice variety is calculated to be cultivated in over 60% of the land of S.E. Asia, replacing thousands of older, local rice varieties. The case of wheat is even more characteristic. 30% of this plants worldwide production comes from only one parent plant. A narrow genetic base aids production under certain conditions, since it homogenizes plants. It does not however aid the adaptation of plants in different areas with a different natural environment. Nor can a plant adapt to environmental changes without genetic diversity. And since environments keep changing, we continuously need new, better adapted species. Having lost the initial diversity however, we cannot start a new breeding programme. Production is led to recession and agricultural economy at a stand-still. 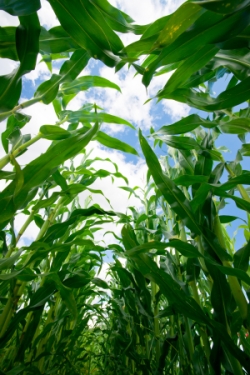 A local variety of an agricultural plant is a lot of different things. In some cases it is a group of plants with one genotype, while in others with a varied genetic material. Usually, local varieties are preserved and carried from generation to generation as part of the tradition. Most of the time their production is not stable, and their yield is not big. They have however two significant advantages. They are numerous, and therefore an important pool of biodiversity, and they are well adapted to their specific environment. These two properties make local plant varieties a good fit to a low profile agricultural production model, where small areas of cultivated land are developed, and inflow needs are limited.

Hence, whenever cultivation aims at quality products through small or medium sized holdings, with the possibility of product or production method certification, we need local varieties.

Furthermore, simply because there are different varieties of the same plant in each area, consumers benefit as they have choice, and the market is not saturated. It is obvious that both from the producer’s and the consumer’s viewpoint, local plant varieties are absolutely necessary and are becoming a prerequisite for development of the countryside of a country like Greece, where environment varies and holdings are small.

Local varieties can however be the basis for large scale intensified production as well. Their genetic diversity is a valuable gene pool for the creation of new super-productive races. Their protection is therefore necessary for the big corporations as well.
There is a lot of effort in Greece today to protect this unique natural plant treasure. Research institutions such as the National Agricultural Research Foundation (NAGREF) and universities have created many Greek plant varieties that can be used in a large scale. Furthermore, research is now aimed to low inflow varieties of high quality products. At the same time, very active NGOs, such as Peliti (www.peliti.gr), Aegilops (www.aegilops.gr)] and producer teams, have organized networks for the preservation and exchange of local plant varieties. The next step is for the Greek farmer to use these varieties for cultivation, and for the Greek consumer to support the demand for quality agricultural products. This way, an agricultural recovery, so much needed by our land, will be sustained.
In one of the next articles, the main Greek agricultural plant varieties will be presented, and special attention will be given on the ways that they can be utilized by producers.

Products you can find in June, July and August.

END_OF_DOCUMENT_TOKEN_TO_BE_REPLACED

Returning to agricultural production: a solution to the crisis, or a conscious action with prospects?

In this grim climate of greek reality, where disappointment and panic prevail, two hopeful trends seem to dawn. The first relates to the demand for better quality of life in all social groups, and the second to the increasing number of young people returning to agriculture. These two trends combined, give rise to a growth potential, that correctly operated can bring not just financial, but mainly social benefits. What is the right way for this return to primary production to be realized? The answer does not seem to be restricted to technical issues, but mainly to the change of our society’s attitude.

END_OF_DOCUMENT_TOKEN_TO_BE_REPLACED

Products you can find in December, January and February.